Does this sound familiar?

You’ve recently gotten a sparkly new Instant Pot and you’re excited about making your first batch of pasta in it.

You’ve heard that making pasta in the Instant Pot is fast and easy.

you’ve also heard stories of hot starchy liquid spraying all over the kitchen leaving countertops covered in an ooey-gooey mess.

You make a decision to ignore those warnings. You think to yourself: I’ll find a recipe that avoids this mess. Plus, those stories are probably overexaggerated anyway. Those people are probably doomsday, alarmists in their downtime. So, you march on!

You find a pasta recipe that looks absolutely amazing! You don’t see a mess in any of the photos – score! It can’t be too bad. Can it?

You gather your ingredients and study the recipe.

You throw the pasta in the Instant Pot, set the time, close the pot and wait. With much anticipation, you wait.

Then it happens… the Instant Pot beeps! You’re startled back to the reality that the time has come to release the pressure.

This is the big moment! The moment you prove that the doomsday scenarios were flat wrong!

With a little hesitation and a lot of hope, you release the pressure and…

Your excitement quickly turns to horror as your kitchen countertops receive a fresh coating of ooey-gooey, sticky mess.

Ok, maybe it’s not quite that bad, but cooking pasta in the Instant Pot can get pretty messy sometimes. If you’re one of those unfortunate souls that get a wild batch of pasta; the mess, and the ensuing cleanup can sure amp up the anxiety meter.

Pasta in the Instant Pot Can Be Less Messy

It can. I promise.

After many nights of cleaning up a sticky mess covering our Instant Pot and countertops, Ryan and I had had enough. We were determined to find a way to make the process of cooking pasta in the Instant Pot less messy.

We had tried all the tricks.

One of the tricks that are most often recommended to avoid a mess when doing a pressure release on pasta is the slow and controlled pressure release method. This is the method that I’ve recommended in some of my pasta recipes – like my Mac and Cheese recipe, for instance.

It certainly does help minimize the mess. However, I have found that the slow and controlled method can take quite a while to release all the pressure from the pot. During this time, the pasta continues cooking which can lead to overcooked, mushy pasta.

Who likes mushy pasta? I don’t.

A Better Way to Pressure Release With Pasta

There is a better way! And it utilizes an Instant Pot accessory that you likely already have.

Most, if not all, Instant Pots come packaged with the trivet. If for some reason, you don’t have a trivet then you should pick one up because there are many other uses for it.

A Messy Kitchen Is the Mother of Invention

We run a pretty tight ship in the evenings around here and a messy kitchen can throw off the entire night. It’s the proverbial wrench in our evening routine.

We’re up against the clock in the evenings. We’ve got deadlines to meet. Kids have to be in bed at precise times. Otherwise, Ryan and I may have to forgo our date night at the Netflix theater upstairs. One unexpected mishap and the night may be totally lost. We just don’t have time to deal with a big pasta mess.

Here is everything you’ll need to complete this project.

The linked products below are affiliate links. For more information, see my disclosure here.

Make sure to check out my Ultimate List of Electric Pressure Cooker Accessories! I’ve included everything you could ever need to help make your pressure cooking quicker, easier, and even more convenient.

So, after, as my seven-year-old would say, the millionth time (it sure felt that way) of having our date night replaced with quality time together cleaning our counters and Instant Pot, Ryan and I were done.

We needed a solution.

I could tell that Ryan had put his thinking cap on for this one.

And then, like an epiphany, it came to him. He shouted: “the spoon!”

I replied: “yes, I put the spoons in the dishwasher.”

I was a little lost at this point because we hadn’t used any wooden spoons to prep the meal. “What wooden spoon?”, I asked.

“The wooden spoon trick! The one where you put the spoon on top of the boiling pot of pasta to keep the water from boiling over. There must be a way that we can use that.”

How would we be able to get the wooden spoon into the pot?

After a few moments of deep thought, it came to him. “The trivet! We can use the trivet!”

First, you’ll place your pasta, water, and salt in the Instant Pot like you normally would when cooking pasta. However, before closing the pot, you will be placing the trivet inside.

So, here’s how this works. It’s very simple.

You know how you usually put the trivet in the pot? Like this:

Well, you’re just going to flip it. Like this:

When flipped, the handles of the trivet will act as legs.

Make sure to push the trivet down into the pot so that it is standing securely on the bottom.

Now you can close the pot and set the cook time as you normally would.

Once the cooking time has completed, hit ‘Cancel’ and do a quick pressure release. When you release the pressure, you should notice a considerable difference in the amount of mess that’s made.

When you open the pot, remove the trivet. It will be hot, so make sure to protect your hands.

We’re Not Actually Sure Why It Works

After doing some research, we don’t really know why this method works but we have some guesses.

Based on the explanations of why the wooden spoon trick works – it doesn’t seem that the trivet trick should work.

Our best guess as to why it works:

The trivet acts like a bouncer, standing at the exit, not allowing any of those sticky foamy bubbles to get out the door. Essentially, as the foam expands, the bubbles that make up the foam begin to pop as they hit the trivet. But without being able to see into the pot, we have no idea what’s actually going on in there.

This sounded like a plausible explanation – so we’re going with it.

And It’s Not Actually Mess-Free

While this method is not 100% mess-free, the amount of stuff that spews out of the pot is so significantly reduced that it feels mess-free by comparison. It’s really no messier than doing a pressure release on any other food.

We have tested this method numerous times to make sure that it actually works and it wasn’t just a fluke. Each and every time, there has been significantly less mess.

For this post, we set two 8-quart Instant Pots side-by-side and cooked the same pasta in each pot. We did this twice so we could test two different kinds of pasta. We placed the trivet in one of the pots and left it out of the other.

The first comparison we did was elbow pasta. In each pot, we placed 1 lb of elbow pasta, 4 cups of water, and 1 teaspoon of salt. We set both pots to cook on High Pressure for 0 minutes. As soon as the pin popped up, we hit the ‘Cancel’ button and immediately did a quick pressure release.

The only difference is that we placed the trivet in one pot and left it out of the other.

The pot without the trivet:

After most of the pressure had been released, this is as bad as it got.

The pot with the trivet:

With the trivet placed in the pot, the mess is much less. Really, no different than releasing the pressure for any other meal.

After most of the pressure had been released, this is as bad as it got.

For this comparison, we did rigatoni pasta. This one has a much longer cook time giving the pot plenty of time to build up a lot of pressure.

In each pot, we placed 1 lb rigatoni pasta, 4 cups of water, and 1 teaspoon of salt. We set both pots to cook on High Pressure for 6 minutes. As soon as cooking had completed, we hit the ‘Cancel’ button and immediately did a quick pressure release.

Again, the only difference is that we placed the trivet in one pot and left it out of the other.

The pot without the trivet:

Look at that pot go! That gooey mess is spraying all over the place.

Here’s a closeup of the action.

The pot with the trivet:

The pot with the trivet created far less of a mess in this comparison. It didn’t spew sticky, gooey stuff all over the counter like the other pot did.

Try It For Yourself

Now it’s your turn to give it a try. I really hope it works as well for you as it has for us.  I know we all sure could use a little less mess in our lives.

Please let me know in the comments below how this method worked out for you. 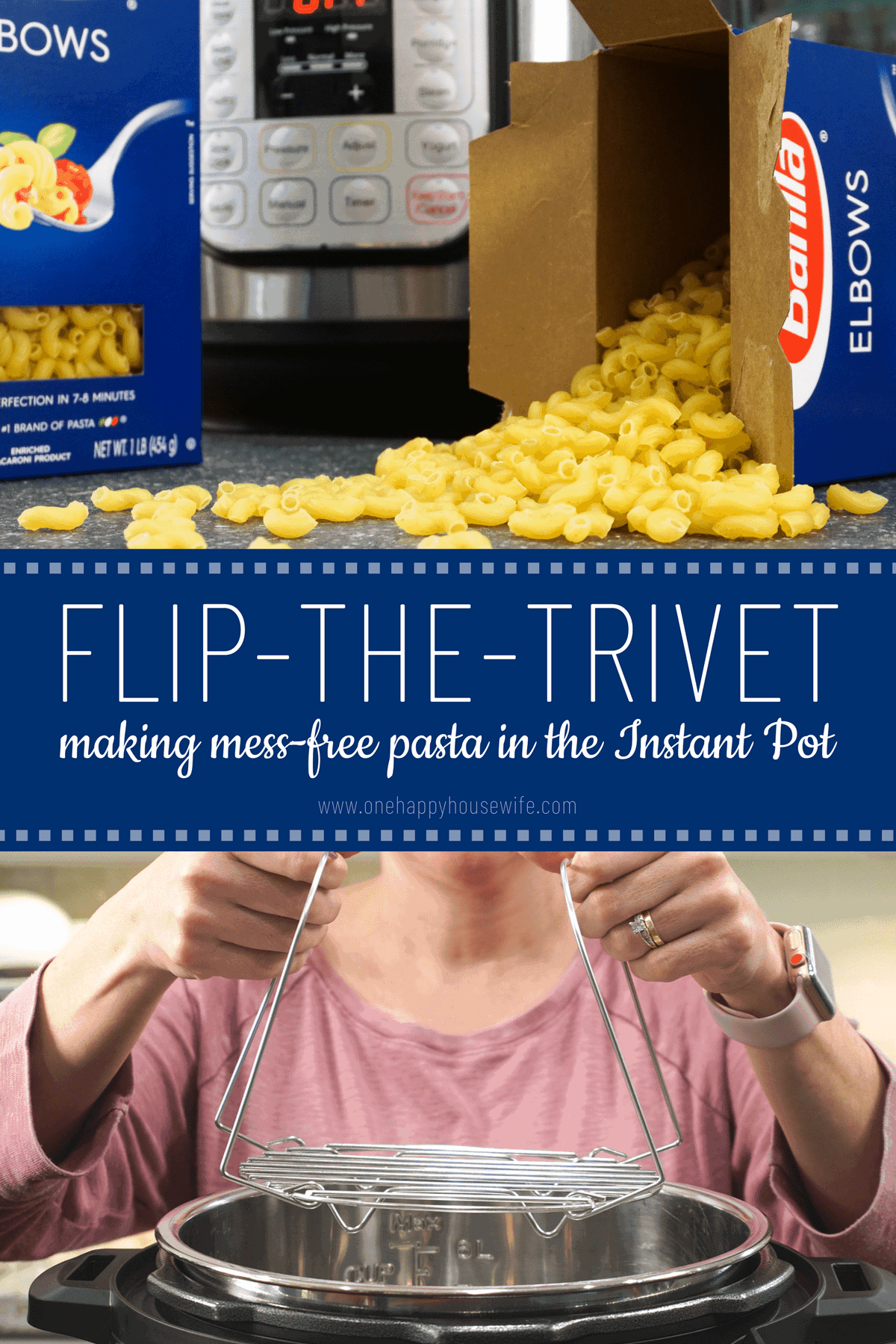 Hi! I’m Valerie and I’m One Happy Housewife! I am lucky enough to be a stay-at-home mom and do what I love every day. Join me as I share some of my favorite things and tips on all things home! Read my story →

Subscribe to my channel on Youtube to watch me make recipes and more. You'll get lots of great tips, tricks, and meal ideas by watching.